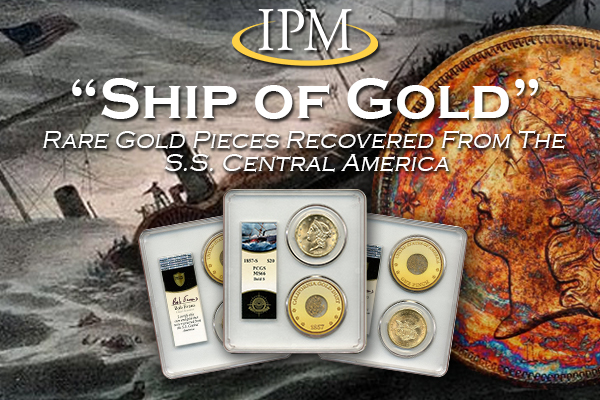 “Of all the numismatic finds, the SS. Central America gold treasure is certainly the greatest that we have ever been involved with.”
- David Hall - Founder PCGS

“The coins of the S.S. Central America are important because one, they’re a time capsule from the period and second, they give collectors an opportunity to own coins from a very famous shipwreck and to buy coins that were completely out of reach.”
- Ron Guth, President of PCGS CoinFacts

The tragic sinking of the side-wheel steamer that operated between Central America and the eastern coastline of the United States during the 1850s has been described as the greatest economic catastrophe in U.S. maritime history, contributing to the Panic of 1857 and leading to a severe recession. The S.S. Central America was given the nickname “Ship of Gold” for her famous cargo: tons of gold from the San Francisco mint and various other gold coins, ingots, gold dust, and bullion from the 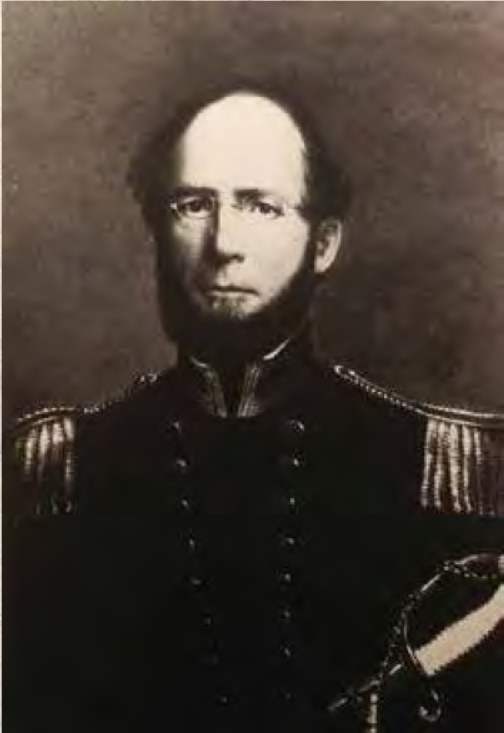 California Gold Rush. Along with 425 passengers and crew, including the ship’s captain, William Herndon, thousands of coins struck predominately by the San Francisco Mint went down with the ship on September 12, 1857. At the time of sinking, the amount of gold carried on board was valued at approximately $2,000,000. Today, that would be equivalent to roughly $300,000,000!

More than 7,000 gold coins were recovered from the S.S. Central America during her discovery in 1988, exactly 131 years after its last voyage. The S.S. Central America find serves as a unique time capsule of artifacts from a prosperous and significant time in United States history.  The first batch of coins recovered and conserved was graded by PCGS in the late 1990s and consisted mostly of 1856-S and 1857-S $20 Liberties. The second batch consists of about 3,100 coins, including additional 1857-S $20’s as well as a wide variety of other coins such as $1 Gold pieces, $3 Gold, Quarter and Half Eagles, Eagles, and Territorial Gold. After conservation, PCGS graded these pieces of numismatic history.

At New Helvetia, Captain John A. Sutter, a Swiss who had come to California in 1839, managed a fiefdom known as Sutter’s Fort. Seeking to provide a source for lumber, Captain Sutter enlisted James Marshall and several others to explore sites for a sawmill along the American River. Marshall was looking at the water running through on the morning of January 24, 1848, when a tiny golden sparkle caught his eye. He reached down, and extracted a small flake.

“Eureka!” Or “I have found it,” became the word of the day and, in 1849, was incorporated as the State motto. It was not until 1850 that travel from East to West by sailing ship or steamer was possible while also experiencing any sort of civilized accommodations. The overland trip by ox-drawn wagon took about five months on average in the early days of the Gold Rush; the actual time varying depending on the route chosen and the equipment possessed.

On August 20, 1857, several hundred passengers boarded the S. S. Sonora, of the Pacific Mail Steamship Line, and left San Francisco headed south toward Panama City. Aboard was over $1.6 million in gold – thousands of freshly minted 1857-S Double Eagles, some earlier $20 coins as well, ingots, and gold in other forms. All went well, and in due course, the S. S. Sonora successfully landed at Panama City. The treasure was handled separately and put aboard a special baggage car on the Panama railroad. Soon, the train arrived in Aspinwall and the treasure was carefully transported to storage.

The S.S. Central America would lead the next leg of the trip. Operating under federal mail contract, the steamers of the Atlantic and the Pacific had United States Navy captains at the helm, men of proven reputation and experience. Captain William Herndon, famous in the naval service including for his explorations of the Amazon River earlier in the decade, commanded the Central America.

Our Allocation is limited and demand for the S.S. Central America's treasure is extremely high.

As the hours passed, a breeze intensified to a strong wind, eventually reaching gale force. The S.S. Central America was battered by the tremendous waves, but continued on her course. By daybreak on Thursday, conditions had become even worse. Wind screeched through tattered sails and rigging, while passengers remained below deck. The S.S. Central America was in the middle of a raging hurricane.

On the morning of September 11, although the crew remained in control, the steamer had begun to take on water in several locations. The ship was tossing violently through the sea, making it virtually impossible to feed coal into the boilers. At 11 a.m. Captain Herndon told the passengers that the ship was in danger and enlisted the aid of all men to bail water with a bucket brigade. At one point the ship listed sharply to the starboard (right) side and the captain ordered all passengers to the port side for balance. 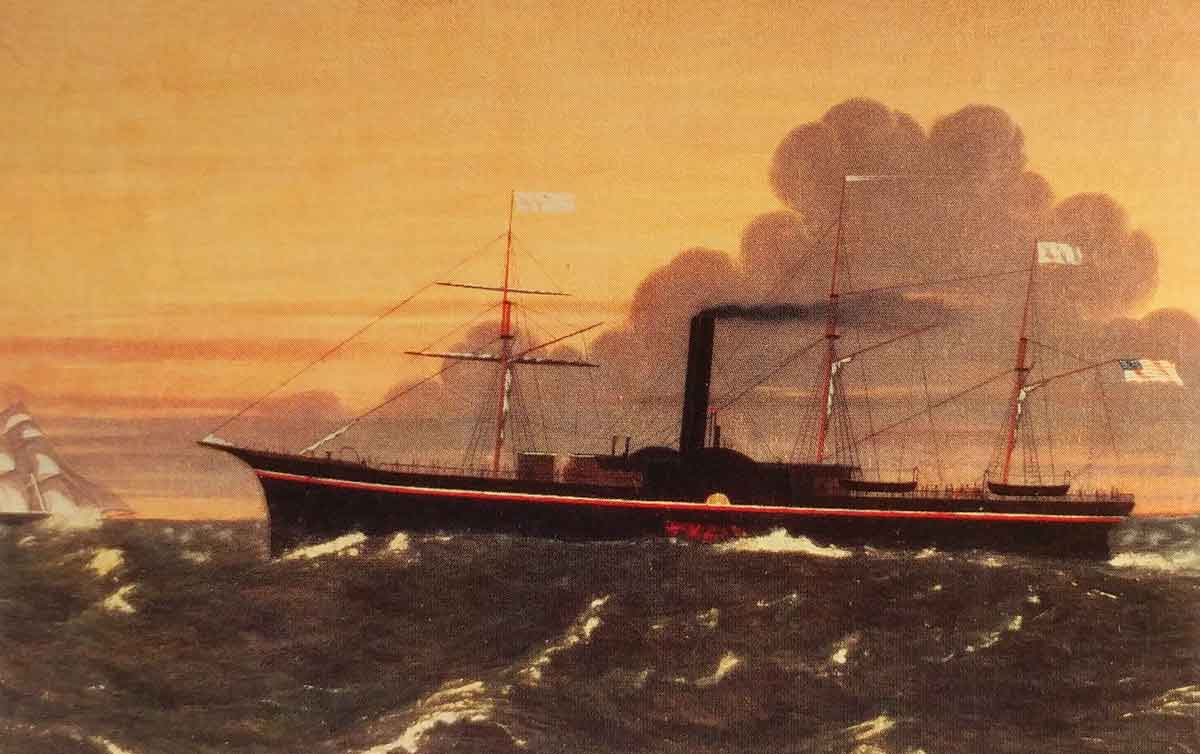 At about 1:00 p.m. on Saturday afternoon, the sail of the brig Marine was seen on the horizon. The storm-damaged vessel, under the command of Captain Hiram Burt  and ten crew members, drew closer. Aboard the sinking S.S. Central America, Captain Herndon ordered women and children on deck, preparatory to boarding lifeboats. Ladies left behind unnecessary baggage. Some, “as if to illustrate how little value was the gold, brought out bags (not entrusted to the purser) and scattered it on the floor, asking all who wanted money to help themselves.” A few ladies picked up pieces, but none took more than two $20 coins, historian Normand Klare wrote.

A few minutes past 8:00 p.m. a tremendous wave hit the S.S. Central America. She shuddered, timbers broke, and with hundreds of men huddled at the front of the ship and Captain Herndon on the starboard paddle-box, she slipped at a sharp angle beneath the waves. Many, including Herndon, went down with the ship, while other clung to wreckage or bobbed about in hollow tin or corkfilled life preservers.
Soon thereafter the Central America came to rest in the darkness 8,000 feet below the surface, about 160 miles offshore of Charleston, South Carolina. Passenger gold was scattered here and there around the ship’s hulk and the surrounding sea bottom.

And there it would rest for nearly 130 years.

Coins of the S.S. Central America 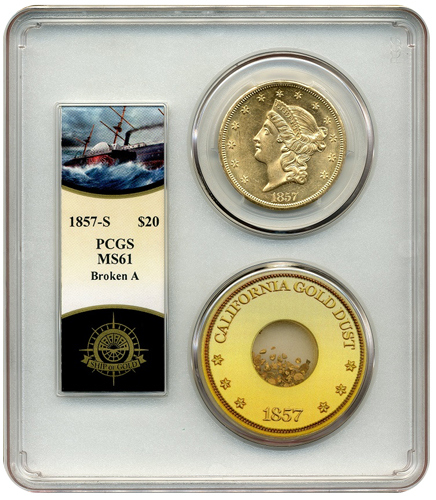 International Precious Metals has secured a very
limited allocation of rare PCGS-graded gold pieces
from the historic “Ship of Gold.” Over 7,000 gold
coins were recovered from the S.S. Central America
during her discovery in 1988 - 131 years after her last
voyage.

The S.S. Central America was given the nickname “Ship of Gold” for her famous cargo: tons of gold from the San Francisco mint and various other gold coins, ingots, gold dust, and bullion from the California Gold Rush. Along with 425 passengers and crew, thousands of coins struck predominately by the San Francisco Mint went down with the ship on 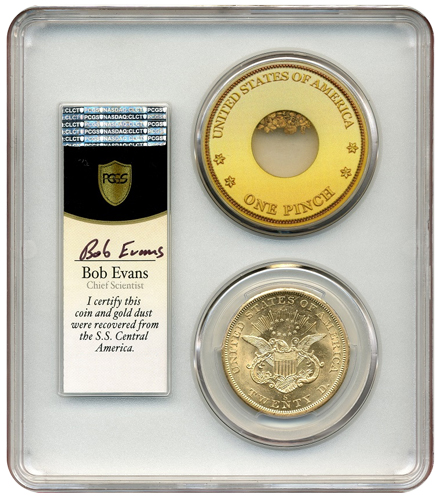 The S.S. Central America find serves as a unique time
capsule of artifacts from a prosperous and significant time in United States history. 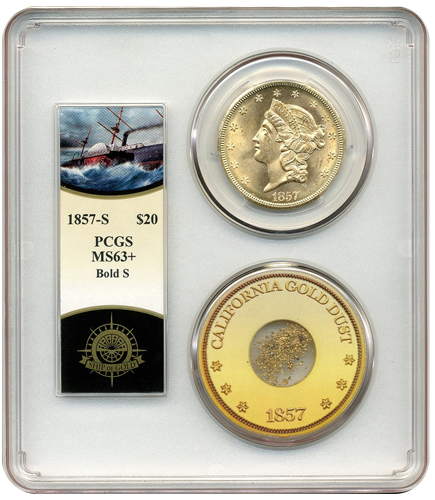 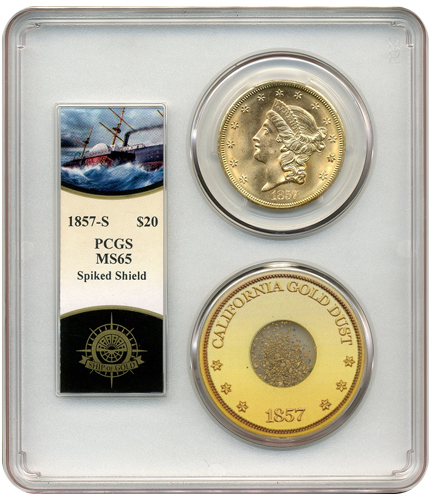 This is an Ultra-Rare Piece, Call Now for Availability! 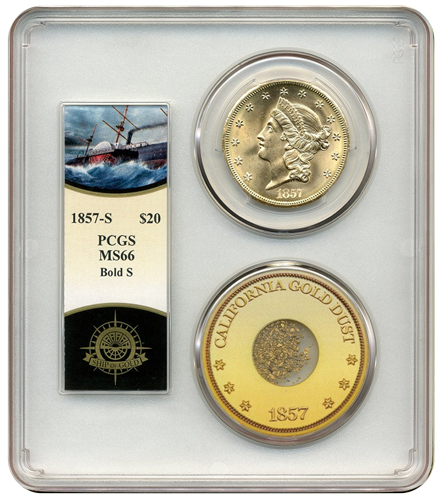 This Specimen will not last, call today!

The Rare Coin Markets Are Exploding

Secure Your Allocation of these Historic Pieces Before They're Gone!